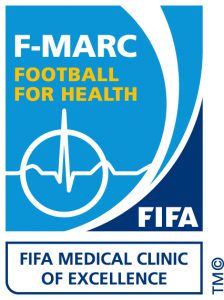 Carolina Medical Center has been certified by the International Football Federation as a FIFA Medical Clinic of Excellence. This is an unprecedented recognition of the competence of the Polish clinic and its personnel. Such a distinction is only granted to two medical centers in the world. Anna Rulkiewicz – LUX MED Group President and Dr. Robert Śmigielski, initiator and co-founder of CMC, shared this information with reporters during a special press meeting, which was held on the 4th of November.

Football (soccer) is the most traumatic of all team sports. According to a survey conducted among participants in the UEFA Champions League, within one season as many as 45 injured are reported! Professional footballer must face the fact that, on average, every third season he will struggle with injury, which shuts him from the game for at least a month. The loss for that reason will be experienced, of course, by clubs, fans and sponsors. The International Football Federation is aware of the importance of the problem and wants to make every player know where to find the highest quality medical care – not only for the treatment of injuries, but also for their prevention, proper diet or anti-doping guidelines. Therefore, FIFA recommends first-class medical centers in the world, to which is assured that they have a great understanding of the needs of players and are able to meet them.

The title of FIFA Medical Clinic of Excellence is a great honor for the Carolina Medical Center and recognition for the work of the whole team. Responding to the needs of the market we want to combine comprehensive medical care of LUX MED Group with broad competence of Carolina Medical Center in the field of orthopedics and sports medicine. We share our knowledge and experience for the benefit of our patients, and the Carolina Medical Center is today recognized – even in the international ground – a competence center around which we intend to develop our offer for active people and reach out to as many Poles as possible – says Anna Rulkiewicz, LUX MED Group President.

Carolina Medical Center is the first clinic in Poland which received the exclusive FIFA accreditation. Wojciech Kowalewski, former Polish goalkeeper, also enjoys this award: We have already organized EURO Championships in Poland, we have beautiful stadiums, and now even a genuine football clinic. I believe that it will soon translate into success of our football – says former goalkeeper of Legia Warszawa and Spartak Moscow, who nowadays educates young players whose sports potential is regularly diagnosed in the Carolina Medical Center.

CMC has worked for almost 16 years for its brand. The initiator and co-founder of the clinic is Dr. Robert Śmigielski. Since 1998, we conducted a series of pioneering medical procedures, we have created original programs of treatment, have given a new lease of life to thousands of people whose full mobility is of utmost importance. I treat FIFA accreditation as a token of appreciation for the team of professionals who dedicate themselves completely to orthopedics and sports medicine – admits Dr. Robert Śmigielski.
The title of FIFA Medical Clinic of Excellence is not only a confirmation of the highest qualifications for injury treatment in football. FIFA also requires of CMC to promote preventive healthcare among the players and to train the next generation of medical specialists in football. CMC excels at these tasks, taking an active part in football healthy initiatives (including series ExtraTime executed by TVP Sport) and opening the door of the clinic for young doctors from Poland and abroad, eager to seek knowledge from more experienced colleagues.

When I started the Carolina Medical Center, I set myself the goal to make it a clinic which will become a benchmark for institutions from around the world. FIFA accreditation shows that we are on the right track to achieve this goal says Dr. Robert Śmigielski.