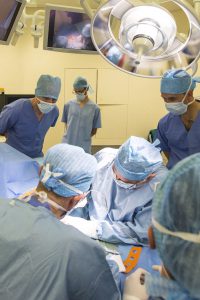 Carolina Medical Center’s specialists performed a surgery of 10-year-old patient – radius and ulna correction using modeling and 3D printing technology. The whole procedure has been planned before entering the operating room.
Preparations for the surgery took several weeks. The most complicated and most difficult step was designing tools needed for precise surgery. Using the CT scan images and special software, digital visualization of both deformed bones of the forearm were made. Tools and implants designed during the first phase of the project, were made in the 3D printing technology from polymers. Implant prototypes and bone models were used to try treatment method and develop individual deformation handling.
Subsequently, accurately described gauges (special rails), wires, plates and screws were printed in titanium. Such prepared operation went very smoothly, because the gauges precisely designated line of cutting the bone and allowed the accurate fusion.
At the moment the girl feels good and her forearm heals correctly.