The ankle connects shank bones (tibial and fibula) with a foot. It is one of the most complex parts of the human osteoarticular system. It is nothing unusual then that it is commonly injured.

Anatomically, we divide this joint into upper and lower ankle. Upper part of this joint is a junction of a tibial and fibula bones forming a concave area. A trochlea of a talus bone forms a convex part of a joint. Lower ankle consists of a talus, calcaneus and navicular bones.

Example procedures performed in the Carolina Medical Center within the ankle:

Arthroscopy is not such a novelty – first arthroscopy was performed nearly 100 years ago in 1918! In those days it was treated mainly as a diagnostic method that allowed looking into a joint as if through a keyhole. Currently, it is performed mainly as a treatment method, that allows performance of many procedures within a joint, including ligaments reconstruction and cartilage correction.

Arthroscopy advantage over traditional operating methods is that there is no need for full joint opening. Usually few (2-3) small (0.5 cm) cuts is enough. Through those cuts a video camera and tools are introduced. Thanks to these actions, coming back to health can be much faster, scars fully invisible and joint surrounding tissue damage – minimal.

Description: Arthroscopy can reconstruct damaged ligament as well as replant detached part of a bone. In the picture there is na arthroscopic image of a reinsertion of a detached anterior talofibular ligament (after a sprained ankle) 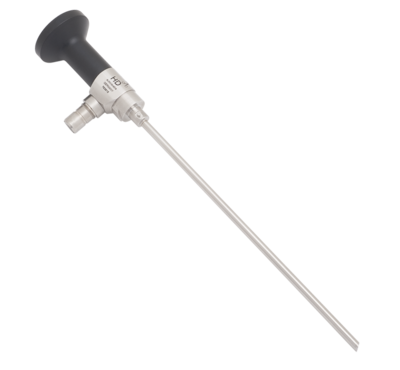 Description: Standard arthroscopic video camera has a diameter of 4 mm. Within the ankle, smaller cameras are also used – with a diameter of 2.8 mm.

Substantially, arthroscopy of any joint can be performed, from the large ones, like a knee or a hip, through an ankle and the smallest ones like interphalangeal toe joints. An ankle is not even the smallest joint that can be treated this way.

Select the part of the body that hurts and learn how we can help: